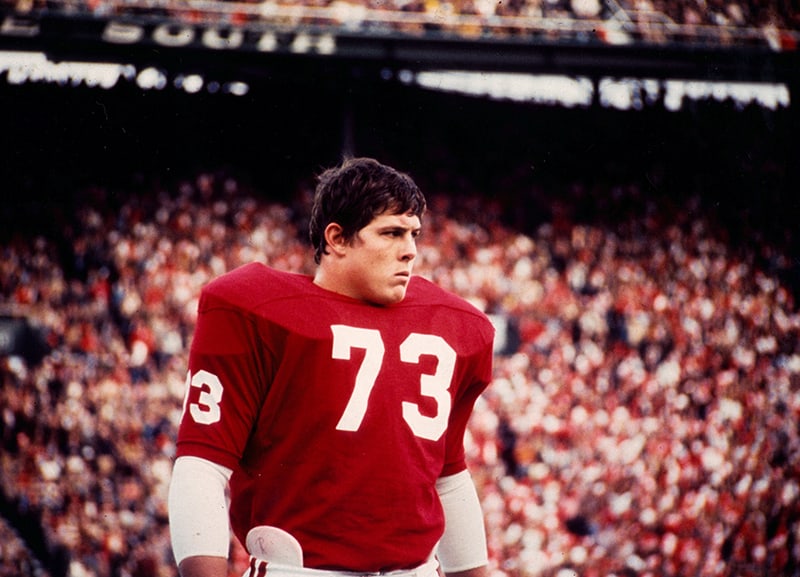 John Allen Hannah a.k.a. the “Hog” is a former NFL player who played guard in the NFL for 13 seasons with the New England Patriots, arriving from the University of Alabama Crimson Tide.

After receiving the All-American honors twice, Hannah became the fourth overall selection in the 1973 NFL draft by the Patriots.

He is considered among the greatest offensive line players. Hannah received first-team All-Pro honors seven times and was selected for the Pro Bowl nine times.

The Hannah boys were no strangers to the game.

His brother Charley was Alabama All-SEC from 1974 to 1976 and had a 12-year NFL career playing for Tampa Bay and the Oakland Raiders teams.

And his brother David played for Alabama from 1975 to 1979. He was a starter for the 1979 national championship team.

John went to the Baylor School in Chattanooga, Tennessee, playing high school football as well as practicing wrestling and track. His high school coach was Luther (Luke) Worsham, who Hannah credits as the man who taught him and showed him what love was all about.

In his senior year, John played high school football at Albertville High School where he finally graduated in 1969.

Hannah’s college football career took off after enrolling at the University of Alabama playing tackle and guard for the Crimson Tide.

Coach Paul “Bear” Bryant was his coach from 1970 to 1972. His relationship with Bryant was different than that of Worsham, but Hannah felt Coach Bryant was able to see what he could do beyond his own perception.

Hannah earned All-American honors in 1971 and 1972. In 1979, he was inducted into the College Hall of Fame. Coach Bryant claimed Hannah was the most talented lineman he ever coached.

In 1972, Hannah married Page Pickens, his high school sweetheart. She was an Alabama cheerleader. John had a wild side that ended in him and his wife separating. He ran with a crowd that his father feared would ruin his life.

John managed to turn his life around, reunite with his wife, and became a Fellowship of Christian Athletes member.

After his senior season with Alabama, John joined the New England Patriots in 1973 and played with them his entire pro career. What he lacked in height, he remedied in quickness, speed, and powerful legs. In his rookie season, he started the first 13 games. A freak leg injury forced Hannah to miss the final game.

In the following 12 years, John was widely recognized as the foremost pro football guard. For ten straight years, he was named All-Pro. From 1978 to 1981, he was given the NFL Players Association’s Offensive Lineman of the Year award.

John was named to the Pro Bowl nine times. Due to an injury, Hannah missed the game after the 1983 season. With the Patriots, he enjoyed seven winning seasons. His cumulative NFL record was 100-91-0.

He was a big part of the then-record when the Patriots rushed for 3165 yards in 1978. John finished his career on a high note after the 1985 season. In his final campaign, he was part of the AFC Championship that the Patriots won, an appearance in Super Bowl XX, an invitation to the Pro Bowl, and All-Pro honors himself.

Hannah retired after the Super Bowl. John became an assistant coach at Massachusetts Governor’s Academy. He left in 2004 to accept a position as the head coach at Somerville High School.

At the same time, he was the youth development coordinator for the city. He led Somerville through a winless season. John left to be the assistant coach for his Tennessee alma mater, Baylor School in Chattanooga.

At the end of Baylor’s 2005 season, he retired from coaching. Player scrapbooks dating from 1892 to the present contain correspondence, photographs, books, video footage of games, and clippings from the Paul W. Bryant Museum research library.

Numerous testimonials praised Hannah as one of history’s greatest offensive lineman. In 1972, he received the Jacobs Award as his position’s best blocker.

He won honors as part of the Southeastern Conference 50-year team and Alabama’s all-century team before being inducted into the HOF in 1999.

What teams did John Hannah play for?

Who is John Hannah?

John Hannah, the “HOG”, is a former football guard (offensive lineman) who played with the New England Patriots throughout his 13-season career in the NFL.

When did John Hannah retire?

Hannh retired from professional football in 1985 after participating with the Patriots in Super Bowl XX.