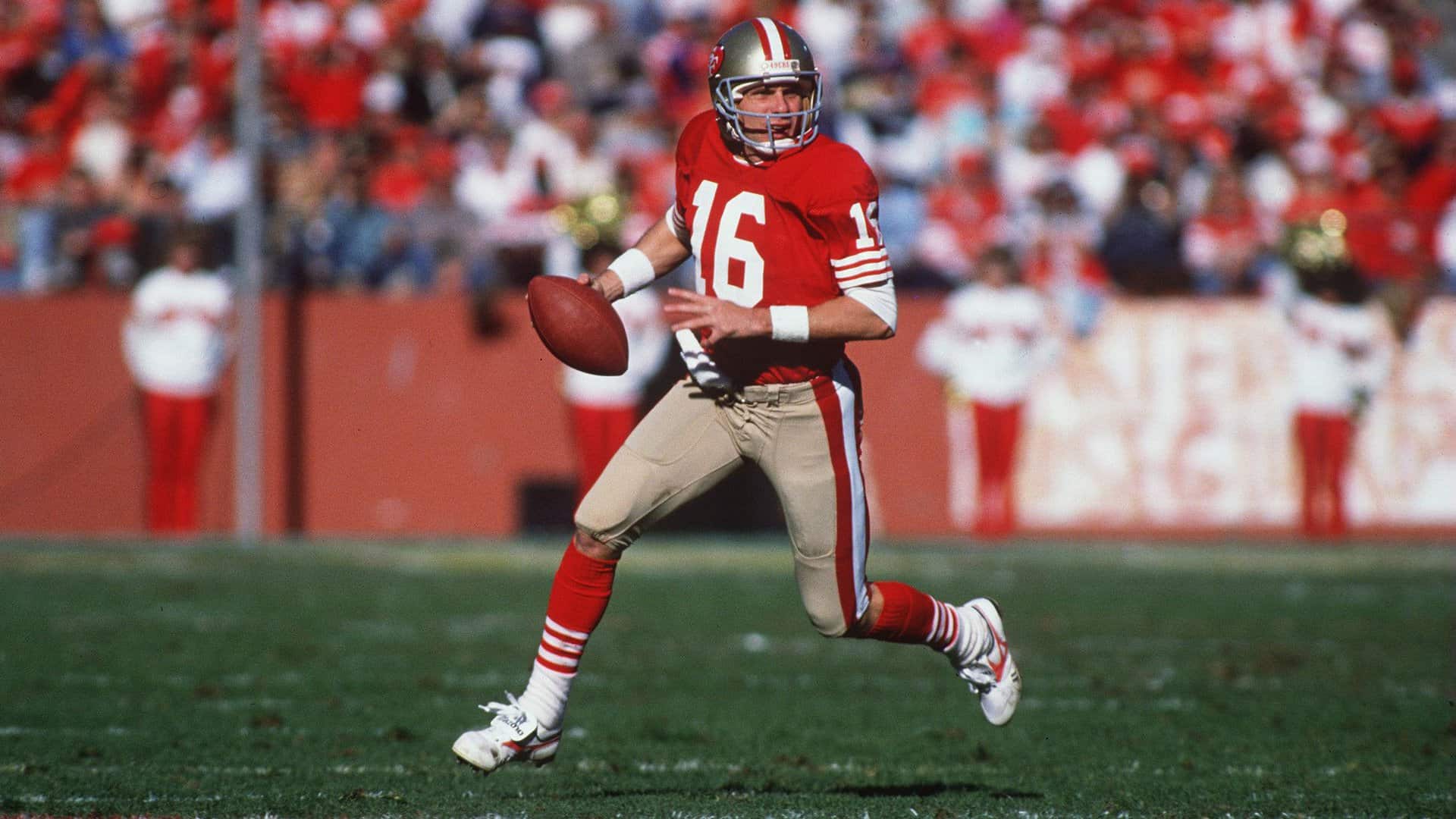 Joseph (Joe) Clifford Montana is a former legendary football quarterback who played in the NFL for 16 seasons – 14 seasons as the San Francisco 49ers’ quarterback. Montana began his National Football League career soon after winning with the University of Notre Dame Fighting Irish the 1979 Cotton Bowl championship.

Montana had several nicknames that stuck during his career – ‘Joe Cool’ and the ‘Comeback Kid’ – earning them for his clear vision of the game and winner personality.

He was the San Francisco 49ers starting quarterback in four Super Bowl games. Montana won the Super Bowl MVP Award a record-setting three times in his career and also holds the all-time highest career passer rating and the Super Bowl career record for the most passes that were not intercepted.

Montana was the Associated Press Comeback Player of the Year in 1986 and was named by AP as NFL Most Valuable Player in 1989 and 1990. In 1990, Sports Illustrated magazine named him the ‘Sportsman of the Year’.

In 2006, the Ringgold High School, where Joe studied and played the team, renamed its stadium to the ‘Joe Montana Stadium’ – in respect to Joe’s high-school career achievements.

Joe Montana’s parents were Joseph Clifford Montana Sr. and Theresa Marie Bavuso Montana. His family was Italian-American. He expressed an interest in sports early in his life.

Joe was not supposed to play youth football until he was nine. but his father listed him as a nine-year-old, so he could play when he was actually eight. He also played for a local basketball team that his father started.

Before college, Montana went to school at Waverly Elementary, Finleyville Junior High, and Ringgold High School. While in high school, Joe played football, basketball, and baseball. He was a backup quarterback for the first two years of high school.

Montana earned the starting position and held it until he graduated. Parade Magazine named him a member of their All-American team after his senior year. Scoring a game-tying touchdown near the end of a game against the Monessen High School football team in his junior year was among his most notable performances.

University of Notre Dame Fighting Irish took note of his talent and offered him a scholarship, which he accepted.

Collegiate Career and the NFL Draft

Ara Parseghian was coach when Montana arrived at the University of Notre Dame‘s Fighting Irish in the fall of 1974. As displayed by college national championship wins in 1966 and 1973, Parseghian successfully recruited talented players, Joe being one of them.

Montana was a top prospect, but first-year students were not allowed to practice or play with the varsity team. The first significant team contributions he made came during his sophomore year.

Dan Devine took over as coach in December of 1974, and although Montana didn’t frequently play during his first year, Divine was impressed with Montana’s performance at practice and in the spring of 1975 mentioned to his wife he was gonna start ‘Joe Montana’ in the final spring game.

Montana’s signature game at the time took place 3 years later as quarterback for the Notre Dame football team, known as the – ‘Chicken Soup Game’, in 1978. It is among the most celebrated performances of his entire football career playing the Houston Cougars in the Cotton Bowl for that season.

The weather conditions were frigid and windy. During the second quarter, Montana fought off hypothermia. At the half, Houston was ahead 20 to 12. The medical team remained in the locker room with Joe and warmed him with intravenous fluids, covered Joe in blankets, and gave him – chicken soup!

Montana returned late in the third quarter with Houston ahead 34 to 12. With eight minutes left in the game, Montana helped Notre Dame as he led the team with three touchdown passes the last of being a game-winning touchdown right at the game-end to a 35 to 34 win over the Cougars.

Coach Divine referred to a promotional film made to commemorate this spectacular game as a ‘Joe Montana Film’. But despite his performance, Montana was not highly rated yet by scouts and in 1979 was drafted to the NFL as the 82nd overall pick in the third round.

After joining the team in 1979, Montana started for San Francisco as quarterback midway through his second year with the team. His keen decision-making and field vision were perfectly aligned with the ‘West Coach Offense’ system, headed by the 49ers’ legendary by himself head-coach Bill Walsh, as Joe relied on accurate and short passes to move downfield.

A 6-yard game-winning touchdown pass by Joe in the 1981 NFC Championship game against the Dallas Cowboys with only 58 seconds left on the clock to 49ers receiver Dwight Clark who then scored the winning touchdown, not only highlighted the team’s successful tactics but also became to be considered one of the NFL’s greatest plays in history receiving the name – “The Catch”.

In 1985, after San Francisco won the Super Bowl for the second time after defeating the Miami Dolphins, the 49ers drafted Jerry Rice as a wide receiver the following spring. Together, Rice and Montana became one of the most productive passing combinations ever in NFL history.

The 49ers won their third Super Bowl with Joe against the Cincinnati Bengals due to a late-game drive against them in the 1998 season. In the 1989 season, the San Francisco 49ers were repeat champions and posted the largest victory margin in Super Bowl history against the Denver Broncos after a win by 45 points.

In Montana’s NFL career with the San Francisco 49ers, late-game comebacks were so common that he was called ‘Montana Magic.’ Thirty-one times Montana led his team to fourth-quarter come-from-behind wins.

Under Joe’s leadership, the 49ers made it to the playoffs 11 times, nine NFC Western Division Title championships, and victories in Super Bowl XVI, XIX, XXIII, and XXIV.

After a throwing arm injury in the summer of 1991, Montana missed 31 consecutive games only to make a dramatic comeback in the second half of the regular season final game; It was a Monday Night game against the Detroit Lions in which Montana performed magnificently with 15 of 21 successful completions and two touchdowns leading the 49ers to a 24 to 6 victory over the Lions.

However, due to that injury, Montana except for the return in the above game sat during seasons in 1991 and 1992, and when he was ready to return, Steve Young was the starting quarterback for the 49ers in the past two years, leading Montana to request a trade.

Soon after in 1993, Montana joined the Kansas City Chiefs.

In his first season with the Chiefs, despite carrying the effects of his injury, Joe was nonetheless selected to the Pro Bowl after leading the Chiefs to win their division for the first time in 22 years. Although Kansas City lost, they were in the playoff berths during Joe’s seasons with the team.

Montana retired in 1995 with 31 fourth-quarter comeback victories and ten playoff appearances during his 11 full seasons as starting quarterback. He also became the fifth quarterback to pass over 40,000 yards in a career in 1994.

Joe was fourth in career passing yardage, attempts, and touchdown passes. He ranked third all-time in completion, and his 92.3 passer rating was second all-time.

All together, Montana played football for 20 years, from 1974 to 1994, and with a spectacular career and outstanding achievements, it was only a matter of time until he entered the NFL HOF.

Montana’s induction to the NFL Hall of Fame took place in 2000, with no surprise to anyone.

How many times did Joe Montana go to the Super Bowl?

Joe Montana went four times to the Super Bowl and won all. He and Terry Bradshaw are tied with the NFL record for most Super Bowl wins.

Did Joe Montana retire a 49er?

No. Montana retired after playing with the Kansas City Chiefs. After Steve Young took over as the starting quarterback for the 49ers and Steve Bono joined as the third-string quarterback, Montana left the 49ers in favor of the Chiefs.

What injury did Joe Montana have?

Montana suffered an elbow injury during the 1990 NFC Championship Game and missed all of the 1991 and most of the 1992 seasons. A left hamstring injury reduced his potential playing time in the Kansas Chiefs.

Why did Joe Montana retire?

Injuries were at the core of Montana’s decision to retire. He was 39 years old, and his body was subjected to a pounding after 16 seasons in the NFL.

Where did Montana go to college?

Joe attended the University of Notre Dame on a football scholarship with a business administration and marketing degree.