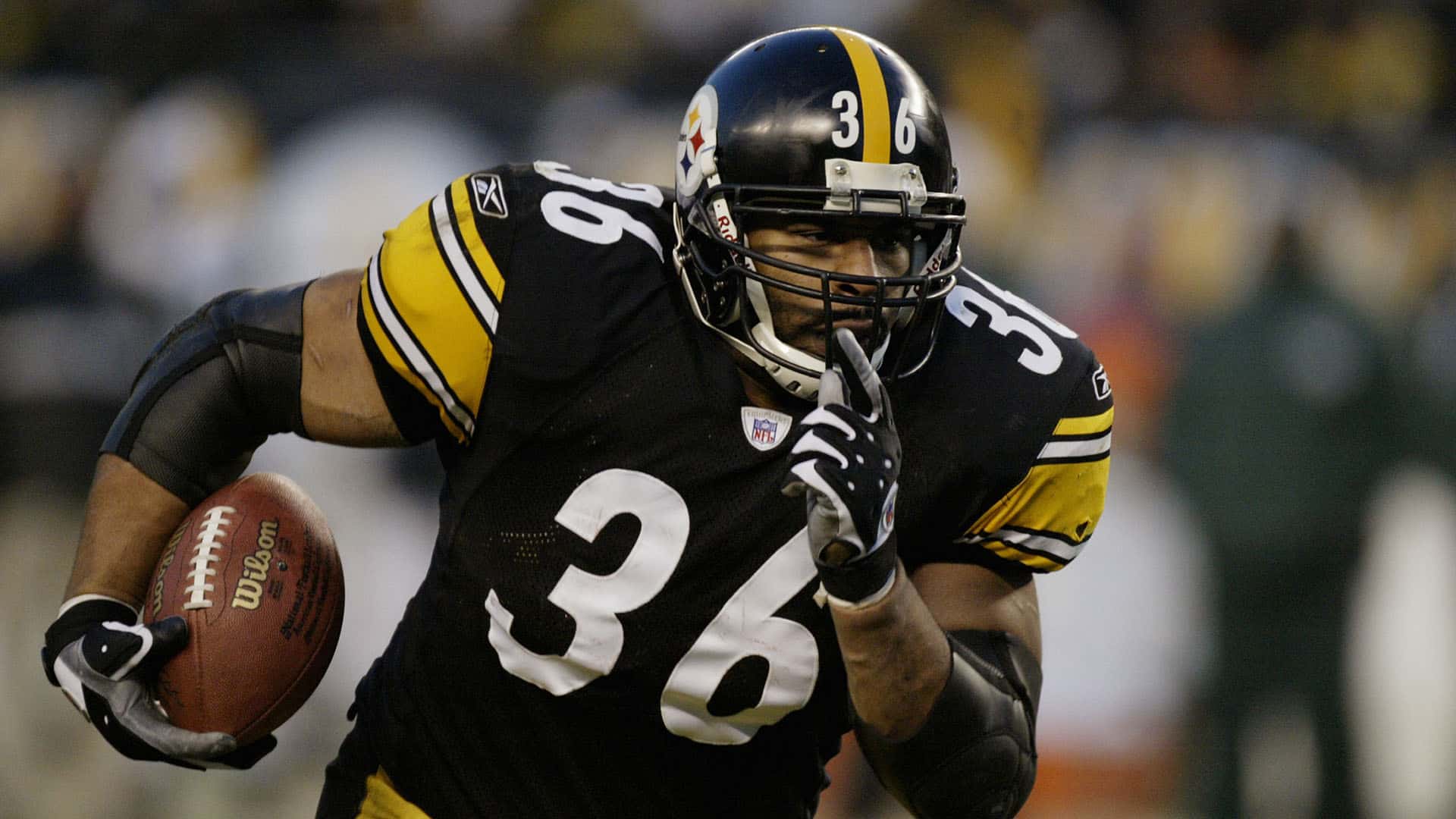 Jerome Bettis was a running back for the National League Football who played 10 out of 13 seasons in his professional football career in the NFL with the Pittsburgh Steelers. Bettis was selected Pro Bowl six times and was a first-team twice All-Pro selection.

Bettis is thought to be among the greatest power runners in NFL history, earning the nickname “the Bus” due to his ability to carry multiple defenders on his back, just like a bus.

Although the L.A. Rams first selected Jerome in the 1993 NFL draft as the tenth overall pick, due to his said running style and large size, he played with the Rams for only three seasons before being traded to the Pittsburgh Steelers.

After attending Mackenzie High School in Detroit playing as a linebacker, Bettis enrolled at the University of Notre Dame to play football for the Fighting Irish.

When the Fighting Irish and coach Lou Holtz offered him the chance to play football, he took advantage of the opportunity with no regrets. Bettis finished his three-year collegiate career with 1912 rushing yards from 337 attempts and 429 yards from 32 receptions.

He made 15 carries for 115 yards and one touchdown in his first year in college. In his sophomore year, his 20 touchdowns set a Fighting Irish record. They resulted in 168 carries for 972 yards (16 touchdowns) and 17 catches for 239 yards (four touchdowns).

His final year was his junior year. He had 154 carries for 825 yards resulting in ten touchdowns and 15 catches for 239 yards for six touchdowns.

Unfortunately, Bettis left Notre Dame before his senior year in the institution to participate in the 1993 NFL draft and therefore did not graduate from college at that point. Jerome was selected in the draft by the Los Angeles Rams in the 1st round as the 10th overall selection.

Bettis returned to Notre Dame to complete his studies 3 years later in 1996 after he was at odds with the Rams and contemplating retirement during that time. He chose to carry a heavy class load totaling 18 credits.

However, in spite of not accomplishing his task to complete his degree during his days in the NFL, Jerome never gave up, and in 2022 he finally graduated with a degree in business from the Mendoza School of Business.

A promise made, a promise kept. 28 years after leaving @NotreDame, I’ve completed my degree from the Mendoza School of Business. I hope my journey serves as reminder that education is the true equalizer in life and it is never too late to start.

In 1993, the three-year contract Bettis signed with the Rams was for $4.625 million, including a $2 million signing bonus. He flourished in his rookie season and was picked as the NFL Offensive Rookie of the Year.

Bettis rushed for more than 1000 yards and was selected for the NFC Pro Bowl team the first two years with the Rams.

In 1995, the Rams moved to St. Louis. The new coach was Rich Brooks, who used a more passiing oriented offense that limited Bettis to 637 yards. Brooks gave Jerome the option of moving to fullback or being traded to the team of his choice.

Bettis chose the trade paving his way to becoming the featured running back for the Steelers.

Upon arriving at the Steelers, Jerome rebounded from his 1995 subpar season, earned the Comeback Player of the Year, and was named first-team All-Pro and ALL-NFC in 1996.

Bettis delivered 320 carries for a gain of 1431 yards. He scored 11 touchdowns for the division-winning Steelers. Bettis was the team’s leading ground gainer for eight of his ten seasons with the Steelers. From 1996 to 2001, the only player to rush for more yards was Eddie George.

Bettis played in 192 regular season games, where he exceeded 100 yards 61 times and was named Six times to the Pro Bowl.

In 2006, Jerome appeared with the Steelers in Super Bowl XL in which Pittsburgh beat the Seattle Seahawks with a score of 21 to 10. The game, very symbolically, was played in Detroit, Bettis’s hometown.

Bettis seized the moment and decided to retire after this appearance in the Super Bowl, at the height of his career.

Bettis had a Hall of Fame career making him eligible for the honor in 2013 although he was not elected that year.

However, soon after in 2015, the Steelers running back became a part of football immortality as he was inducted into the Pro Football Hall of Fame.

During his acceptance speech, Jerome thanked the crowd for their appreciation of a power-running game. And referring to his nickname told the audience he wanted to take them on a bus ride that started in Detroit, Michigan, and ended in the Football HOF.

He expressed gratitude for their embrace of him and his entire family and his entire team, who played a game they loved. He felt he had support from the world’s best football fans and the best teammates.

Why did Rams get rid of Jerome Bettis?

The Rams let Bettis choose whether to stay on the team or be traded since as a running back Bettis was less suitable to the team’s passing-oriented offensive installed by coach Rich Brooks.

What was Jerome Bettis 40 time?

How many times did Jerome Bettis fumble?

Jerome fumbled 44 times in his pro football career – 41 times in the regular season and 3 times in playoffs.

Is Jerome Bettis a Hall of Famer?

Yes. Bettis was inducted into the Hall of Fame on August 8th, 2015.